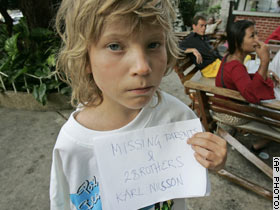 The little boy in the picture above is from Sweden; his handmade sign says that he is missing his parents and two brothers in the aftermath of the tsunami that hit South Asia on Sunday. He looks tired, worried, confused, scared...the same emotions that thousands upon thousands of Indians, Sri Lankans, Indonesians and others across South Asia are feeling right now. I can't imagine his fear or how his life will change if his family isn't found. I can't fathom such a natural disaster happening in the United States. This boy was in Thailand on vacation, but the natives of South Asia are poor. Their lives have been so severely disrupted and they're without the proper access to medical care, food, or adequate shelter.

I donated to Catholic Relief Services to help their efforts in providing immediate care. I'd urge everyone to consider a donation as well. I didn't give much; wasn't able to give much, but if we all pitch in, we could make a difference. Click here for a list of international aid organizations that are accepting donations to help in relief, recovery, and reconstruction.

I won't get any direct benefit of the donation that I made, but it sure makes me feel good that maybe in some small way I could be helping. That's what charity is all about.

To begin with, I've got to make an apology: in the last several days, I've heard a few complaints about my lack of new material on the blog. I can't believe that I've only had one posting added in nearly a month, but it isn't without a good reason. I had a big research paper due on November 29th, a couple of papers due the week after that, and then finals, of course. It hasn't been an easy few weeks, so I guess it makes sense that I haven't posted anything worthwhile since November 22nd. Still, I apologize to my normal readers who have been craving some "Shooting from the Lip" and coming up short since last month!

Quite a bit has happened, most of which I won't detail right now. To start with, finals are over, and I think they all went well. I know that I have two As for the semester already; I'm still waiting on the results of my other two classes. Finals week was rough, probably just because I had one final on Monday and had to wait until Thursday and Friday to have the other two (one final was the previous Monday, December 6th). But in retrospect, the semester went blazingly fast. Now I've got some work to do over the break; namely, working on grad school applications. After looking over some schools, I am really interested in Florida State, but I'm also applying to other schools as well. I do need to find the school that will help me out the most financially.

I'll be leaving the dairy next semester, so you won't have any more stories about the girls. I've definitely got two jobs lined up: a line artist and columnist for the Kansas State Collegian. I'm also in the process of getting an emergency teaching certificate so I can substitute teach for USD 383 in Manhattan. I have Tuesdays and Thursdays off, so I thought that I'd make another job option available. A friend of mine from Topeka has done emergency substituting and has really enjoyed it, and it sounded like a pretty good idea to me. I chatted with Meredith Vargo about it this morning, and she had several helpful suggestions for dealing with elementary kids; namely, having a "bag of tricks" ready to use at a moment's notice, so that if I'm called in and no lesson plans have been written, I can keep the kids entertained.

We had a Christmas get-together at my brother's in Hays yesterday, with Mom and Dad, Michael, Paul, and Reilly and Mackenzie there. I sure miss getting to see Reilly and Mackenzie. They had a good time, I think, and it's always fun to see them opening their gifts. We'll be out in western Kansas next weekend for Christmas and I'll get to see them again, plus a lot of other family members.

I'm really getting anxious for whatever lies ahead after graduation at K-State. I'm ready for a more serious academic environment that a graduate education will be able to provide. Next semester I have one final required history class: advanced seminar in history, where we'll focus all semester on writing a thorough research paper. I was originally in a class that was focusing on the Crusades, but I've switched now to one that leaves the topic a bit more open. We'll be able to write on anything from Dwight Eisenhower's presidency. It meets once per week at the Eisenhower Library in Abilene, so researching there will be an interesting experience, I think.

There's a lot that I should write about, things both personal and political, but that'll have to come later. I'm two days into my Christmas break already and haven't gotten a chance to catch up on rest. I don't get a very long break, either: I have to be back in Manhattan on the 26th because I do go back to work at the dairy on the 27th. We don't start classes again until January 12th, but I'll put in some time at the dairy before the semester starts. And then it's on to new and different things. Details will follow, of course!

Have you heard anything about the Atkins Diet or any other low-carb craze recently? I haven't. I predicted way back on June 20th (in the archives) that this whole thing was just a fad and would pass. It's done so rather quickly. Lots of businesses are losing a lot of money because they jumped on the bandwagon much too quickly. I'd have rather been a food-related business that missed the low-carb madness and took a temporary hit in the wallet than be a business that has wearhouses full of products that will never be used!

I haven't written on the blog for quite some time; I'm still here, though. There's a lot going on. Lots of papers, lots of finals, plus work. I'm keeping busy. Stay tuned in, and I'll get some better updates cranked out before too long.